MASTER
Home
About
Get There
Tickets

Pantry of Salt and Sugar Release

By Madame Dolores (other events)

Multiplatform artist Christiane Dolores releases her third solo album as Madame Dolores, The Pantry of Salt and Sugar with an album launch of a live performance on a water limousine floating down Pittsburgh’s three rivers.  The July release is occurring in celebratory tandem with the Love Pittsburgh Music month long celebration.

A selection of 15 songs culled from a two-year, 500 micro-song project, The Pantry of Salt and Sugar offers raw sonic pastiches, each serving as a touch point for universal themes of tragedy, confusion, loss, acceptance and love. Musical selections range from 2 minute to four-minute pieces, each its own vignette that brings unique imagery and color to form abstract canvases for the ear.

Known for the emotional intensity of her live performances, raconteur Madame Dolores will be joined by fellow musical colleagues Tom Emmerling on drums; Gena on vocals and percussion; Craig Arlet on guitar; Zoltan Weslowski on bass and Herman Pearl on percussive efx  to interpret and perform the Pantry of Salt and Sugar’s electronic soundscapes on Saturday, July 27th, 9 pm to 11 pm on the Pittsburgh Water Limousine.

Artist Madame Dolores, who is a first generation immigrant and multiracial female composer and performer, after the 2017 inauguration, took to her iphone not to tweet, but to compose music, wherein she generated deep, electronically soulful and discordant music chronicling her socio-emotional reflections on present-day America.

States Madame Dolores: “My morning ritual became to pick up my iPhone and compose spontaneous micro-songs – all music, lyrics and vocals are improvised responses to my past, present, and future selves.”

The results are a channel stream of consciousness, an emotional bloodletting and paradigm shift for personal survival during these tumultuous times. What began as a micro-song project has evolved into full on electro-compositions triggered by memories, encounters, reflections and experiences-beyond politics. Influenced by her love of horror films and Euro film noir, science fiction and musical genres ranging from Avant Garde jazz, Funk, 1960’s Italian soundtracks, performance art and punk rock, Madame Dolores’ love of beats, movement and layering of sound, along with her earthy, intense vocals lift each song to its own suspenseful precipice, leaving the listener wondering what’s next in the Pantry. Will it be salty, or sugary?

With less than 10% of music having been created by a woman, Madame Dolores’ strong stance for female artists is present in her musical works as well as her visual art and curatorial practice.  Called “Nina Hagen meets Sun Ra” by her producer, Kevin Reynolds out of Los Angelese, her art riffs on heavy, dark polyrhythms that become an abstract canvas for the ear. The album features the sonic magic of Producer, Kevin Reynolds from Los Angeles and Pittsburgh’s own beloved Producer of deep beats, Soy Sos.

From The Pantry of Salt and Sugar, standout songs include “Land of the Shrinking Hearts,” “Still Lonely, in a Crowd” and “I Don’t Belong to No Country.” Madame Dolores currently performs vocals in Indigenous Resistance and Qlitterati, is an artist member of the #notwhitecollective, and has a traveling exhibition “The Book of White People.”

The 500 songs of the Pantry of Salt and Sugar can be found on Soundcloud. 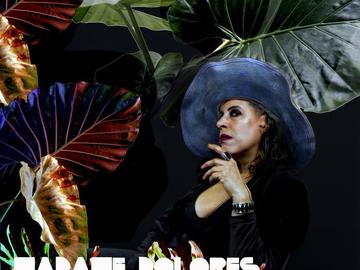 1) ADA Facilities and Pre-Charter Arrangements. To better serve our customers, please provide advance notice of
passengers with wheelchairs or special needs for boarding.

3) Vessel Capacity. Fantasy has a capacity of 110 passengers designated by U.S. Coast Guard. Final numbers for guests
and passengers are to be provided 48 hours prior to all charter events. PLC reserves the right to refuse boarding to any
passenger that exceeds vessel capacity.

4) Services and Crew. The charter customer may request specific service and crew staff for their charter for an additional
fee. We will do our best to accommodate your request with no guarantees.

7) Railings. No climbing or sitting on railings, seat backs or any other area above the designated seats. Passengers must
keep both feet on deck at all times.

8) Animals. No dogs or any animals that can be harmful to human beings will be permitted. Exception is allowed for
certified Guide Dogs.

9) Charter Day -Unsafe River and Weather Conditions. PLC does NOT cancel charters due to inclement weather that
does NOT pose a threat to the customer or our vessel.

Prior to Charter Day. In situations outside the control of PLC, such as advanced notice of likely unsafe river
conditions, severe weather forecasts or mechanical problems, PLC reserves the right to offer the customer the
private charter event at the dock or reschedule the charter with the customer. In such a case the customer will have
the option to apply their payment to a new charter date or request in WRITING a full refund.
Charter Day. In the event of unsafe river conditions, severe weather conditions or mechanical failure or as
required by U.S. Coast Guard, other regulatory or governmental agency, our captain reserves the right to stay at
dock or if the vessel is underway to return to dock. In such cases, if conditions permit, the charter will continue at
dock. If the charter cannot continue at dock and passengers are required to exit the vessel, a prorated credit for a
future charter shall be issued.

10) Unsafe and Unruly Behavior. A good public and customer image is critical to our operation. Our captain reserves
the right to return to port in the event any guest becomes unruly. Unruly behavior includes, but is not limited to: ignoring
onboard safety regulations; rudeness to PLC Captain, Crew or Staff; foul language; shouting to people or groups onshore;
intoxication; and any other commonsense inappropriate behavior. If this action is required, no refund will be issued. If the
gravity) of the occurrence warrants, Pittsburgh Police will be notified and brought to the scene.

11) Heating Apparatus. No heating apparatus with open flames, including but not limited to open burners and grills, are
permitted aboard the vessel.


12) Smoking Onboard. Smoking is permitted in designated area only on the outside decks. Please deposit your butts in
the proper receptacles.

other events by this organization